We think most advertising washes over us, immunised against the continuous bombardment of marketing bumf. An internal firewall subconsciously curates the flow of matter, filtering and arranging it into the brain’s junk folders.

Yet, despite our defences, the damage was instilled way back. Inherited by our weak-minded ancestors who fell prey to first-generation advertising techniques.

Back then resistance was low, naivety allowed absurd campaigns to slip through the net, seeping into the collective id. Dupes ran deep, slurries of lies and misinformation emanated from the Mad Men age of baseless claims and grandiose promises. Like gullible toddlers chasing bubbles, our distant relatives bit hard into the sinful apple of consumerism. Things were never the same.

This flaw has been replicated through the gene pool. Scarred by early exposure and scorched into muscle memory, today we still buy nonsensical products. Unshakable ticks, accepted and coped with. The impulse buy is 21st century Retail Tourette Syndrome – blurting protest at our own inability to ignore the lure of the V8 32 cylinder potato whisk.

How else could you explain smoking, other than a blindsided genetic blip, egged through the gates of logic by old-school advertising? Everyone hated it the first time. That should have been enough. But the scenario had been cleverly constructed; it was cool – cool people did it – cowboys did it. Sucked in and never exhaled; a crystallised mind cyst that oozes poison into the thought-process. Ingeniously, they made it enticing enough to persevere through that early hurdle, into the clear blue water of addiction. Even with today’s cigarette packet anti-verts of combusted lungs and prolapsed smiles, the impulse is still burnt deep in our circuitry.

So, how do we detune all this rubbish shoved down our throats and nip the disease of advertising at the bud?

The Marketing Inoculator is a decorative eye patch that induces nausea when a retail transgression is about to take place. 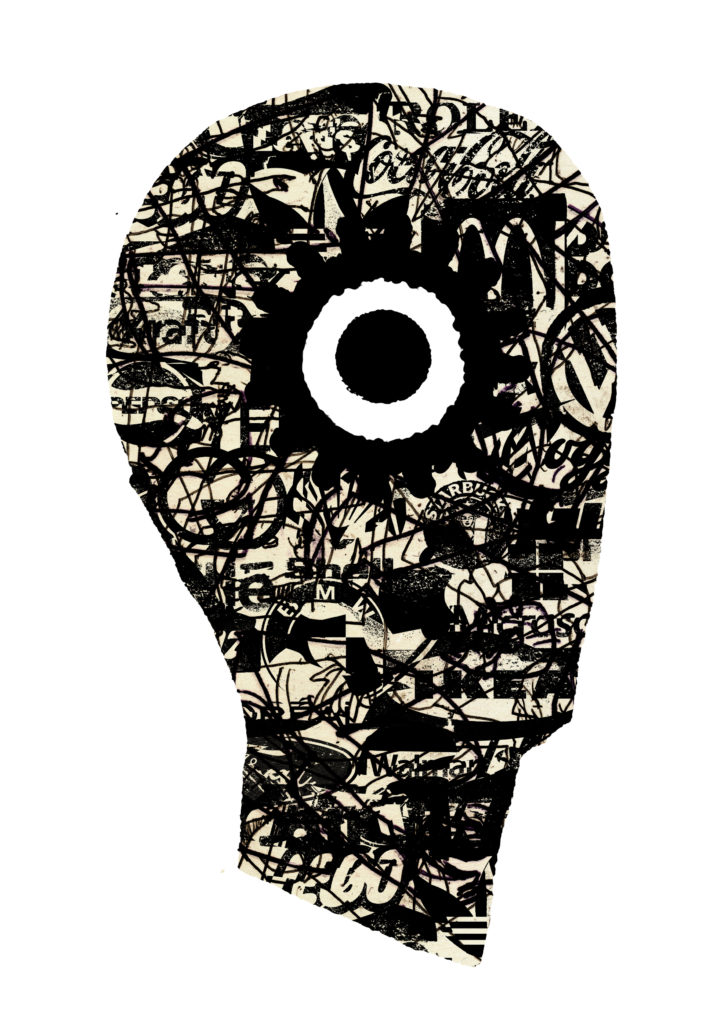 Picture the scene: you’re in a mall, something catches your eye, you gravitate towards a shoe shop, drifting with ghostlike grace. Kanye West’s new orthopaedic rap stilettos sparkle in a presentation cabinet. Your eyes glaze over, they begin to reel you in. Half blinded by the patent leather, half transfixed by the reflecting apparition of Kanye nodding encouragingly, you reach out, a purchase imminent.

Then it hits you. A sucker punch folds you double, a wave of motion sickness detunes your equilibrium until you explode in nausea. A dry retching cat, hacking up a basketball sized furball. All orifices blink and splutter. Every pore in your body protests electrically. You back away – frightened, shocked, tail between your legs.