As Gen X replace Baby-boomers at the top of corporate and political ladders a new liberal attitude glimmered on the horizon. The 80’s children, born into prosperity, peace and pointlessness, who spent a youth intoxicated on rave music and rave drugs, promised to unshackle the stiff mindedness of their parents. Then Brexit, then Trump. The bubble pricked. All the frilly free-world window-dressing thumped off the table by tabloid readers, Tweeters and deviant politicians. Environmental concern, equality and normal haircuts, now merely relics of a bygone era.

Only one vestige of this promised land remains: Cannabis legalisation. The wheels are still in motion for marijuana’s mass rollout around the world.

Carefully analysing the shift in public opinion and noticing the looser attitude to drugs, governments have strategically back-peddled their ‘Just Say NO’ campaigns, moving the beleaguered drug from criminal immorality to taxable cash cow. Industries swoop with products that stoners only ever fantasied about. In one sense, pot smokers sigh a relieved exhalation; the threat of prosecution evaporating, free to smoke without consequence, but one paranoia has been swapped with another; the groundswell of intolerance and division providing new angst.

The growers have been suddenly flipped from hardened criminals to alternative health practitioners. From high crime to good-willed horticulturists. But what about those already incarcerated? Caged for dealing something now legal. Imprisoned pot offenders now reside in a legal grey area, an unprecedented no-man’s-land somewhere between right and wrong. 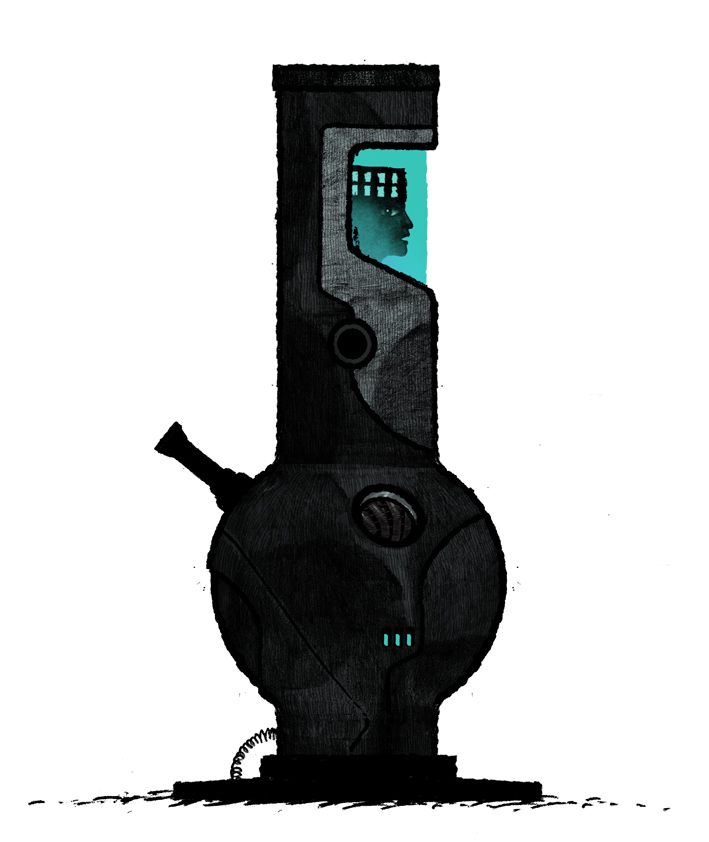 Whilst new marijuana legalisation grinds through the bureaucratic gears, the answer is to put weed felons on ice.

In a legal loophole that could potentially save governments millions in compensation, pot prisoners are being frozen in cryogenic chambers, whilst their acquittals are processed, à la Han Solo in Return of the Jedi, preserved below -130c by a frothing slug in a high castle. Legally the sentence paused, considerably reducing state reparations.

Although the legislative U-turn is being widely championed, the administrative burden on the legal system to acquit and release pot prisoners is predicted to take three years. That’s three years in the deep freeze.

A lengthy hibernation and an ethical hot potato, with a wide spectrum of pros and cons. Whilst being cryogenically frozen effectively pauses ageing, it also produces severe memory loss. Advocates argue this by-product might ironically serve the community; these once harmless stoners have hardened in the can – thugified by years of rubbing shoulders with real criminals. The cold-headed lobotomy therefore a blessing: deleting the crime schooling, replacing it with smooth skin and a clean slate.